URBANA, Ill. — The University of Iowa women’s tennis team put up a fight against Illinois but fell 4-3 on Saturday inside Atkins Tennis Center. The Hawkeyes are now 6-3 in the Big Ten Conference.

The Hawkeyes started out on top earning the doubles point. Iowa’s Danielle Burich and Michelle Bacalla defeated Illinois’ Ashley Yeah and Kate Duong 6-2 at the No. 3 spot. Alexa Noel and Samantha Mannix clinched the doubles point at the No. 1 spot, defeating Asuka Kawa and Josie Frazier, 7-5. Samantha Gillas and Elise van Huevelen were in a head-to-head battle against Emilee Duong and Sasha Belaya at the No. 2 spot but went unfinished.

The Fighting Illini opened singles with the first win at the No. 6 spot. Josie Frazier won in straight sets defeating Danielle Bauers, 6-0, 6-2. No. 97 Alexa Noel brought momentum back to Iowa, defeating Illinois’ Asuka Kawai at the No. 1 spot, 6-2, 6-1. Noel is now 15-0 in singles. 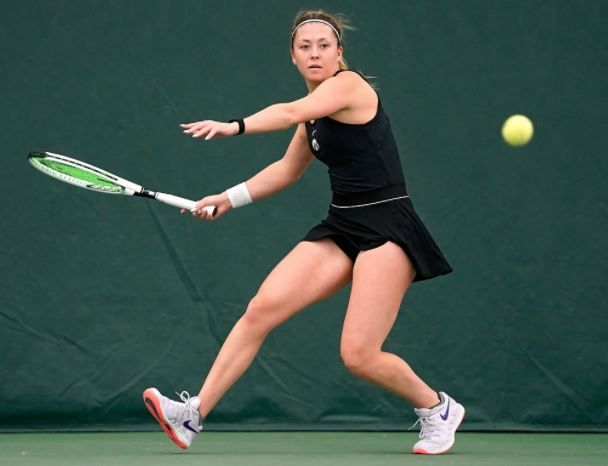 “It was a really though battle today and the team feels bad to come short. It is a tough place to be on the road and compete in a hostile environment. I have give Illinois a lot of credit, they battled really hard in singles. I think that the loss is on me and I feel like within a season you are going to have some highs and lows  Today was a tough loss, but I am going to own it as a coach and get our squad ready to go tomorrow.”

The Hawkeyes stay in Illinois to face Northwestern on Sunday inside the Combe Tennis Center. Action is set to start at 12 pm.m. (CT). Live stats and video can be found on Northwestern’s schedule page.