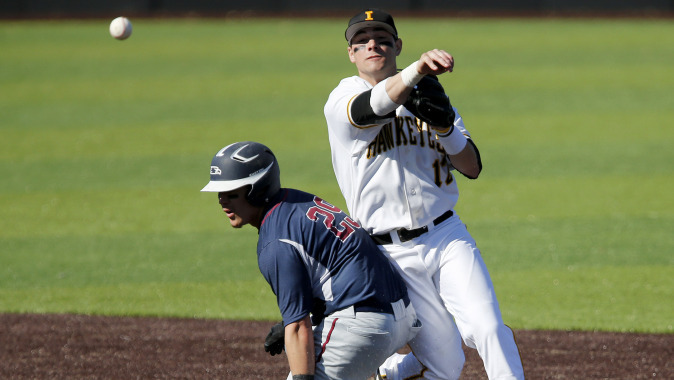 THIS WEEK
The University of Iowa baseball team closes out spring break with a three-game weekend series from March 20-22 at Big 12 foe Kansas at Hoglund Ballpark. Friday’s game is set for a 6 p.m. (CT) start, Saturday begins at 2 p.m., and Sunday’s finale at 1 p.m. All three games will be streamed on ESPN3.

GAME COVERAGE
Zach Mackey will provide play-by-play and Ray Gilmore will serve as the color commentator for the Kansas series via the subscription-based service Hawkeye All-Access on hawkeyesports.com. Fans can also follow every game with live stats (GameTracker) on hawkeyesports.com and live updates are also available on Twitter: @UIBaseball.

WATCH ON ESPN3
All three games of the Iowa-Kansas series will be broadcast on ESPN3 (watchespn.com). Steven Davis will handle the play-by-play, while Scott Heitshusen will be the color analyst.

QUICK HITTERS
? Four players — Eric Toole (CF), Jake Mangler (2B), Kris Goodman (OF/3B) and Joel Booker (RF) — have started every game for the Hawkeyes.
? Senior Jake Mangler posted a .474 (9-of-19) batting average in the four-game series at Houston Baptist with multi-hit games in three of the four contests, including a 4-for-5, two RBI performance in game three. The four hits were a career best.
? Junior Nick Roscetti returned to the Hawkeye lineup as a defensive replacement in the first game at Houston Baptist after missing three-straight contests because of injury. He started the final three games, finishing 2-for-4 with an RBI and double in the finale.
? Freshman Nick Allgeyer posted his second career win in just his third career outing in the series finale at Houston Baptist, throwing two innings, allowing one run on two hits. The southpaw is 2-0 with a 2.25 ERA this season.
? Sophomore Corbin Woods and junior John Barrett came through in pinch-hit opportunities at Houston Baptist. Woods tallied his first hit as a Hawkeye, while Barrett delivered a two-run single for his first career RBIs.
? Freshman Austin Guzzo has thrown out five of seven would-be base steals for a 71.4 caught-stealing percentage — the third-best percentage nationally.

SCOUTING KANSAS
? The Jayhawks — a 2014 NCAA Tournament qualifier — bring an 8-12 record into the weekend. Kansas took 2-of-3 games from Big Ten foe Michigan last weekend in Lawrence, winning 6-5 in the opener and 8-4 in the finale. KU lost game two, 4-2.
? Kansas is hitting .283 as a team with three regulars hitting over .300. Connor McKay is leading the team with a .351 batting average with 11 extra base hits, Colby Wright has a .338 average with a team-best 16 runs, and Michael Tinsley is hitting .313 with eight doubles, two home runs and a team-best 15 RBIs. Blair Beck sits at .299 with five home runs and 14 RBIs.
? On the mound, Kansas has a 5.97 team ERA over 20 games, giving up an average of 6.3 runs per contest. All four Jayhawk starters have ERAs over 5.00, and the pitching staff has a .308 batting average against. Kansas has been solid at the back end of its bullpen with Stephen Villines racking up five saves and posting a 1-0 record with a 2.81 ERA in nine appearances.
? Kansas will start junior LHP Ben Krauth (3-2, 6.23 ERA) on Friday and sophomore RHP Sean Rackoski (0-2, 6.65 ERA) on Saturday. Sunday’s starter is TBA.
? The Jayhawks have struggled defensively, committing 28 errors to post a .963 fielding percentage. Kansas is averaging 1.4 errors per game this season.

THE SERIES
? Kansas leads the all-time series over Iowa, 17-10. The Hawkeyes swept a two-game series in Iowa City last season, winning 5-3 and 12-7 on April 8-9.
? Blake Hickman made his first career start in the opening game, throwing 2 1/3 innings and allowing two runs. Sasha Kuebel earned the win with 5 2/3 innings in relief, scattering eight hits, striking out six, and allowing one run. Tyler Radtke pitched the ninth for his first career save. Eric Toole, Jake Mangler, and Dan Potempa had six of Iowa’s 10 hits, and Potempa had four RBIs.
? Iowa pounded out 18 hits in the 12-7 victory in game two with six different Hawkeyes posting multi-hit games. Toole finished 4-for-5 with a career high five RBIs, while Mangler was 2-for-5 with three RBIs. Jake Reinhardt earned the win, throwing two innings of three-hit ball in relief.

OFFENSIVE TIDBITS
? Junior Joel Booker has hits in 13-of-16 games this season, which includes a team-high seven multi-hit games. The right fielder drove in a career-high four runs in the series finale at Middle Tennessee State, and is tied for the team-high with 10 RBIs.
? Booker is hitting a team-best .425 (17-of-40) over his last 10 games with a .525 slugging and .465 on-base percentage. Six of his seven multi-hit games have come during the stretch.
? Seniors Eric Toole has reached base safely in 15-straight games, which includes a current eight-game hitting streak.
? Senior Jake Mangler is hitting .400 (18-of-45) with a team-high 10 RBIs over the last 10 games, a streak the corresponds with Mangler making the move to the No. 2 spot in the Iowa batting order. All six of Mangler’s multi-hit games have come during the 10-game stretch and his average has climbed from .143 to .318.
? Mangler is hitting .381 (8-of-21) with runners in scoring position and has eight two-out RBIs. Senior Sean Moore (.375, 3-of-8), and junior Tyler Peyton (.357, 5-of-14) are both thriving with runners on base.
? Junior Tyler Peyton has hits in 11-of-13 games to post a team-best .356 batting average, and is currently riding a seven-game hitting streak.

JUNIOR Tyler Peyton…
? shines as a two-way player for the Hawkeyes, going 2-1 with a 2.81 ERA with 21 strikeouts on the mound, while hitting a team-best .356 with seven RBIs. Peyton starts at first base when he is not pitching.
? has pitched five innings in four of his five starts, allowing one or fewer runs in his first four starts.
? posted wins over UALR (2/20) and at Middle Tennessee State (3/7). He struck out a season-high six in a no-decision in opener against Kansas State (2/13) and threw five shutout innings against Cincinnati (2/27).
? is 7-2 in his Iowa career with a 4.39 ERA in 19 starts. Peyton has five quality starts and has pitched into the seventh inning six times in his career.

JUNIOR Blake Hickman…
? is 2-1 with a 2.39 ERA in five starts. He has 17 strikeouts against 12 walks.
? has thrown at least six innings in each of his last three starts. Hickman went seven innings — the longest outing of his career — allowing four runs on seven hits in a loss at Houston Baptist.
? pitched six innings in victories over Cincinnati (2/28) and Middle Tennessee (3/7).
? notched his first win of season in 5-1 victory over Cincinnati. He was perfect through three innings, striking out 7-of-10 batters to start the game, and had a no-hitter through six innings. He tied a career-high with nine strikeouts in the contest.
? has a 4-3 career record with a 3.26 ERA over 60 2/3 innings in 22 appearances, including 10 starts. He has 51 strikeouts against 35 walks.
? is focusing solely on pitching for the first time in his baseball career. He transitioned to the mound midway through 2014 season.
? pitched in the Cape Cod League in the summer of 2014, posting a 3-4 record with a 4.91 ERA in nine starts.

#HELLERBALL
? Iowa won 30 games in UI head coach Rick Heller‘s first season in 2014 — the most wins by a first-year head coach in program history and the third 30-win campaign since 1993.
? The Hawkeyes advanced to and won a game in the Big Ten Tournament in 2014 — the program’s first tournament victory since 2010.
? Iowa has posted winning streaks of nine games (in 2015) and seven games (in 2014) — the longest streaks for the program since 2012.
? Under Heller, Duane Banks Field has been undergoing a transformation with AstroTurf installed in the infield and outfield, new outfield fences and the addition of a new video scoreboard.
? Iowa had five All-Big Ten selections, including the first first-team honoree since 2009. The Hawkeyes also had two first-team all-region selections.

UP NEXT
Iowa returns home for a midweek game against Bradley on March 25 at 3 p.m. (CT). The Hawkeyes open Big Ten play March 27-30, hosting Indiana for three games.