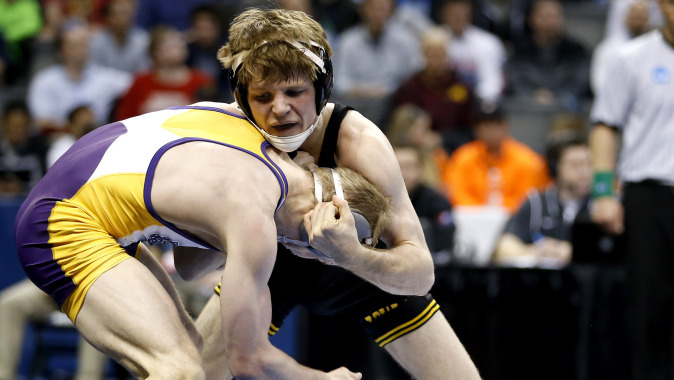 DECORAH, Iowa — The University of Iowa wrestling team opened the 2014-15 season winning 12 individual titles at the Luther Open on Saturday.

Iowa swept 10 weights in the Elite Division and added a pair of titles in the Silver Division.

Clark and Telford pinned their way through their respective brackets. Clark registered four falls in a combined 13 minutes and 19 seconds to win the 133-pound title. Telford needed just 3 minutes and 33 seconds to record three pins and win the 285-pound title.

The Hawkeyes swept the top three spots at 149. Brody Grothus defeated Brandon Sorensen, 3-2, in the semifinals, and won the tournament with a 9-6 decision over Edwin Cooper, Jr. in the finals. Grothus pinned his first two opponents, but narrowly advanced past the quarterfinals with an 11-8 decision.

“I faced some adversity in the quarters, but stayed the course and found a way to win,” said Grothus. “I know I didn’t wrestle my best today, but no one wants to be wrestling their best right now. I got tough, found ways to win, and I’m excited to build leading up to the next time out.”

Nick Moore used three major decisions and one fall to win the 165-pound title, while Sammy Brooks used one pin and three technical falls to win the 184-pound division

The Hawkeyes totaled 30 pins in the Elite Division, including two each by Dziewa and Kelly, who won titles at 141 and 157, respectively. In the 157-pound consolation finals, Logan Thomsen defeated Patrick Rhoads, 16-8, to finish third.

Sam Stoll and Logan Ryan won titles in the Silver Division. Stoll recorded four first-period falls to win the championship at 285, and Ryan defeated teammate Seth Gross, 2-1, in the first tiebreak to win the 141-pound title.